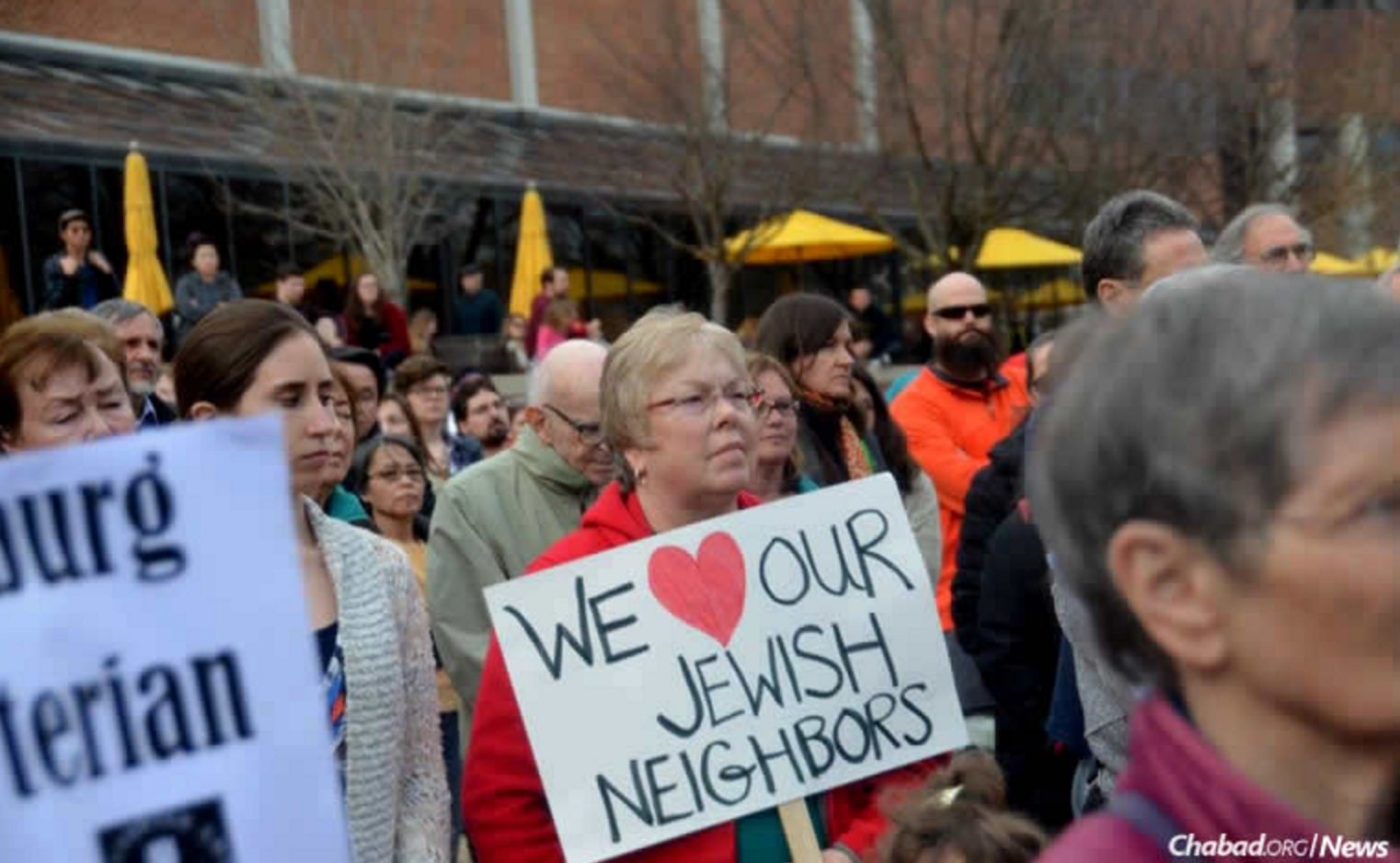 Pictured above: Hundreds of people from Blacksburg, Va., attended a solidarity rally at Virginia Tech to show their support for the Jewish community after an anti-Semitic incident on Shabbat at the campus Chabad center.

An estimated 500 people from in and around Blacksburg, Va., gathered at Virginia Tech late Monday afternoon to stand against hate. The solidarity rally was held two days after anti-Semitic flyers—100 of them, with hand-drawn swastikas—were thrown on the grounds of Chabad’s Librescu Jewish Student Center on Shabbat.

Some held signs that said “We love our Jewish neighbors” (with a red heart where the word “love” should be). Others sported school colors, T-shirts with Hebrew writing, and logos from their fraternities and sororities. Students mingled with senior citizens and small children, who stood there to show that hate would not be tolerated in their town of roughly 42,000 people.

First-year student Leor Clark, 19, had an immediate reaction when she heard about the flyers: “I was angry that there were people out there who thought that way,” she told Chabad.org

“The turnout was amazing,” says the native of Alexandria, Va., just outside Washington, D.C. “There were hundreds more than I expected, and it was incredible to see the support that we, as a Jewish community, had in such a remote town.”

She took part “because as a Jew, it’s important not to hide who I am and the culture I have to share. I shouldn’t be afraid to be Jewish anywhere, and this rally was the perfect show of solidarity among Jews, and other religions and cultures alike.”

Of the 33,000 students at the university, about 1,200 are Jewish, according to Rabbi Zvi Yaakov Zwiebel, co-director of the campus Chabad House with his wife, Chanie.

Chabad at Virginia Tech was named after Holocaust survivor Liviu Librescu, a 76-year-old professor at the school who sacrificed his own life to save his students during a deadly shooting attack on April 17, 2007.

The flyers were discovered less than 24 hours after the rabbi announced an April 24 program to mark the 10th anniversary of Librescu’s death, featuring a talk by another Holocaust survivor, Rabbi Nissen Mangel. The rabbi immediately informed police, walking to the station since it occurred during the Jewish Sabbath. An investigation is underway.

“The way to combat darkness is with light,” said Zwiebel at the rally, to rousing applause. “We don’t fight darkness with darkness; we fight darkness with light.” Noting that the Jewish holiday of freedom, Passover, will be held in a few weeks, the rabbi noted that as a response to what has happened, Chabad of Virginia Tech will host the largest Passover seder in its history.

A fundraising campaign has been launched with a goal of raising $25,000 to assist the effort.

First-year student Leor Clark: “I shouldn’t be afraid to be Jewish anywhere.”

Joining students and community members, who signed a large banner that read “Hokies Stand Together,” were various university and local government officials.

“The perpetrators of this crime hoped to divide us, but they have only succeeded in uniting us,” stated Virginia Tech President Timothy D. Sands at the rally. “Coming together is a very positive thing,” he continued, adding that he had learned more about the Jewish community in two days that he’d ever known before.

Lining up to sign a banner that read: “Hokies Stand Together.”

Students mingled with senior citizens and small children, there to show that hate would not be tolerated in their town.

Virginia Tech President Timothy D. Sands stated: “The perpetrators of this crime hoped to divide us, but they have only succeeded in uniting us.”

Families turned up in a show of support. As the university president said at the rally: “Coming together is a very positive thing.”

Local police officers were present on Monday; an investigation is underway.