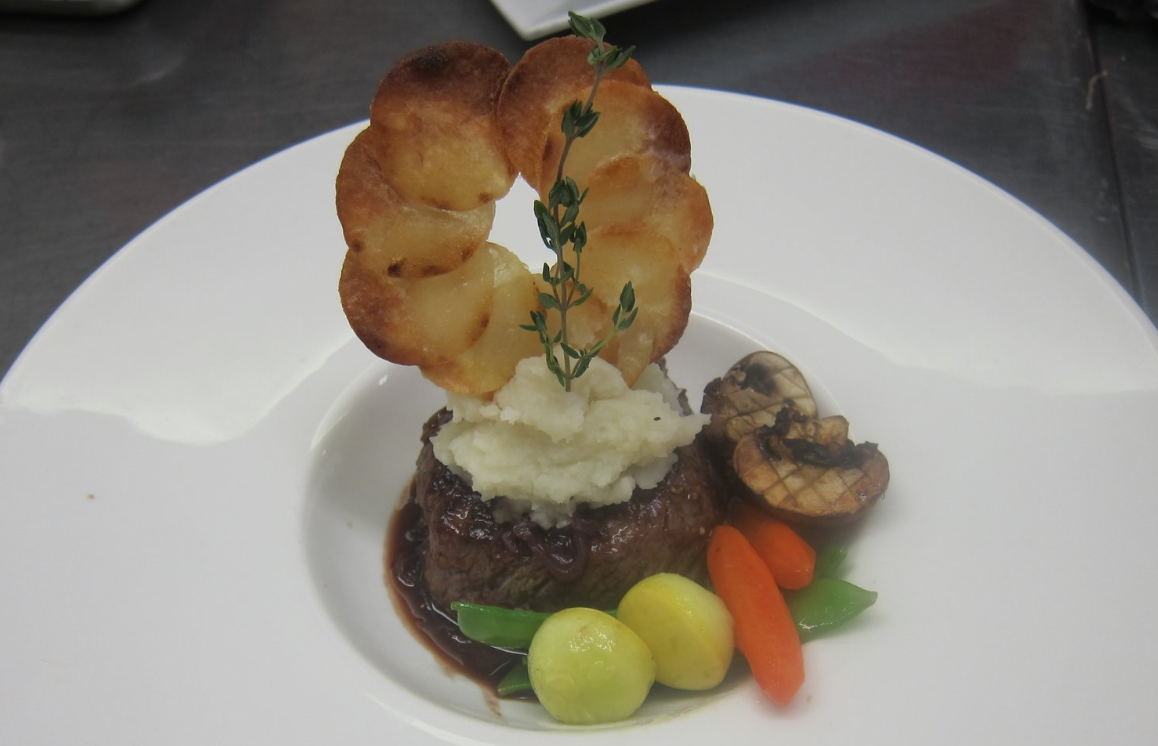 Do you recall what you were eating in kosher restaurants 10 years ago? Had you tried sous-vide dishes? Homemade sausage? Fresh, cured gravlax made with only salt, sugar, peppercorns and dill? Shaved black truffles on fresh pasta, tossed with roasted porcini mushrooms? Fried chicken so crisp and tender that you’d almost swear it was soaked in buttermilk?

Not likely. It was probably a burger, steak or slice of pizza, and don’t forget that side order of sushi.

Yet during the last decade, one man’s unsung efforts have had perhaps the greatest influence on shaping and growing the skills of kosher-observant culinary students, mentoring them with his quirky sense of humor, imbuing them with kitchen “street smarts,” and ultimately placing them in top kosher restaurants for externships and employment.

If you have eaten at a high-end kosher restaurant sometime during the last decade, chances are that someone working for that restaurant was a student, or a student’s student, of Chef Avram Wiseman.

Wiseman welcomes the first cohort of students May 1 for the Brooklyn-based Kosher Culinary Center, which calls itself “the only kosher culinary school outside of Israel to offer professional training in the culinary and pastry arts.” But until now, his far-reaching industry footprint has flown under the radar.

A kosher caterer, restaurateur, banquet chef and menu consultant for two decades, Wiseman turned to teaching in 2000. At the Art Institute of New York, he trained close to 500 students in classic French culinary techniques, espousing the methods of Auguste Escoffier, the father of modern French cuisine. In 2008, he started teaching at the Center for Kosher Culinary Arts (CKCA). In its second-floor outpost on Coney Island Avenue in Brooklyn, he worked as the small school’s lead culinary instructor and, by 2010, became its dean of students. He was known to work tirelessly, taking only short weekend breaks to go fishing in his beloved Atlantic Ocean, up until the school’s closing in 2015 due to New York state licensing issues.

“Avram Wiseman is like a walking iPhone 7—fully charged, on steroids, with every app already downloaded, full of knowledge and fun,” Kolotkin said.

Wiseman has mentored hundreds of students who will, even today, stand as he enters the room and run to do his bidding, while shouting the Gordon Ramsay catchphrase, “Yes, chef!” His graduates are a veritable army of knowledgeable professionals—working in restaurants, synagogues, dormitories, catering and commercial food production, or as personal chefs and entrepreneurs. Still others are food writers, wine gurus, and hotel or banquet hall managers.

“[Wiseman] is not only a great teacher in terms of teaching what he knows, but I did something totally different and he supported me in that as well,” said Bracha Serle, a personal chef for a New York family and author of the She’s The Chef blog. “He’s always available for questions.”

New Jersey resident Jeremy Brown is not working as a chef, but has applied lessons he gleaned from Wiseman to an entirely new field.

“Chef Wiseman showed me that one should master their work skills, become good enough at it to where they can have a sense of humor and a smile, while accomplishing their objectives in earning a livelihood,” Brown said.

Esther Anzaroot, an entrepreneur from Brooklyn who owns and operates a gluten-free bakery business that sells Middle Eastern delicacies, said Wiseman “has impacted me by giving me confidence in my abilities, teaching me new techniques and always, always demanding the best out of me.”

In a thank you letter sent to CKCA director Jesse Blonder after the school’s closing, a funder of several chefs’ participation in the training program wrote, “You have saved several marriages, made several others possible by allowing the man to earn an honorable living, allowed at least one widow to keep her house, reunited two families that I know of and allowed at least one woman to leave an abusive marriage. You (and of course Chef Avram!) should take great pride in your work, a pride that will last far longer than the pay you get.”

“This is part of my legacy,” Wiseman said in a joint interview with The Jewish Link and JNS.org. “To be able to take a student, who hasn’t yet found a career or parnassah (livelihood), and watch him and help him as he develops marketable, valuable skills, and then to see him rent his own apartment, and watch him get married and have children, and support all of them by cooking…This is why I do this.”

Wiseman will lead the forthcoming Kosher Culinary Center training program along with one of his former students, Perline Dayan. Chefs David Ritter and Naomi Ross will join him as instructors, and Rabbi Zushe Yosef Blech of Monsey, N.Y., will serve as the top kosher supervisor.

In a partnership with Ben-Gurion University of the Negev, the Israeli university will be the optional five-month destination for Kosher Culinary Center students after they complete the 216-hour culinary program in Brooklyn.

“Once students arrive…they will have a five-day Birthright-style tour of Israel, with an emphasis on Bedouin and Mediterranean flavors, and then go to the university in Eilat, where they will live in dormitories with a three-meal-a-day cafeteria. At the end of their time in Israel, the students will have certificates from Ben-Gurion and also the Marriott, Hyatt or wherever their externship location has been,” Wiseman explained.

If the new center’s students turn out anything like Wiseman’s past pupils, the next decade should be another exciting era for kosher restaurant-goers.