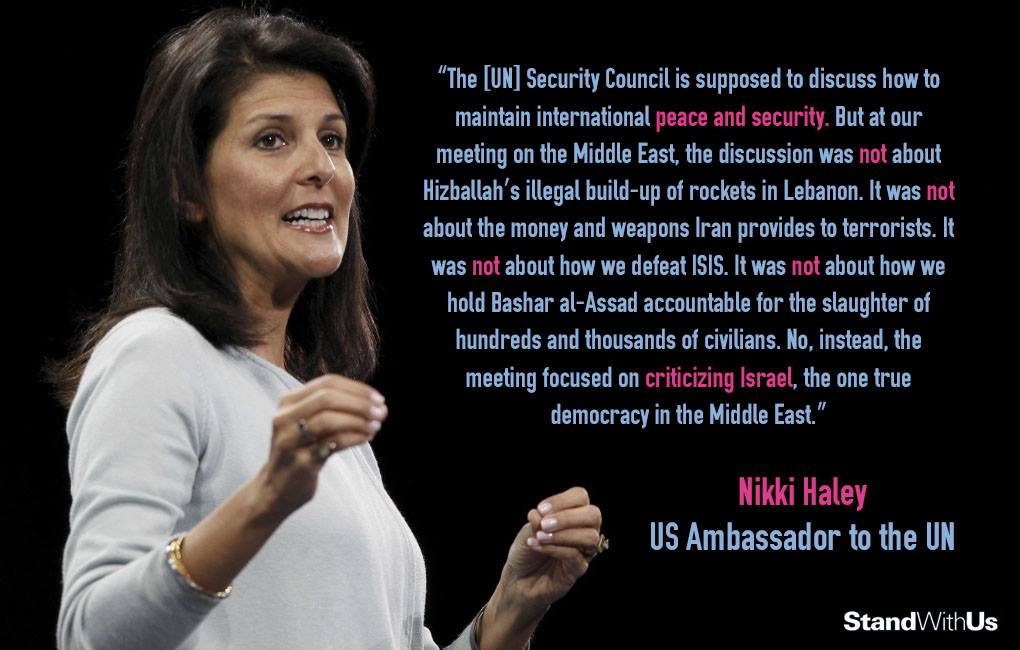 ACTION ALERT! Sign the petition thanking Nikki Haley for her support of the state of Israel at the UN! The petition will be delivered to Amb. Haley at the end of next month!

The new United States Ambassador to the United Nations has taken a strong stance against the shameful anti-Israel bias at the U.N. Please join us in showing our support and sign the PETITION.

The petition reads as follows:

We the undersigned would like to express our thanks and deep admiration for your statement on February 20th, regarding the blatant and harmful anti-Israel bias at the United Nations.

For decades, Israel has endured a hostile bias at the United Nation and its affiliate bodies. Despite being the only true democracy in the Middle East and a bastion of human rights, Israel is regularly singled out and censured, more so than the rest of the world combined.

This shameful practice comes at the expense of millions of people around the world whose human rights are regularly violated. The leaders of these countries use Israel as a lightning rod to distract the world from their own sins, exploiting the anti-Israel bias to continue persecuting, women, LGBTs, Christians, ethnic minorities, journalists, political dissidents and more. Blinded by its obsession with censuring Israel, the United Nations has been abandoning those who need it most, and endangering the prospects of a negotiated peace in the region.

Your words at your first press conference as United States Ambassador to the U.N. rang clear and true. We want to express our sincere thanks and deep gratitude for your courage and candor in support of Israel and human rights. We wish you great success in promoting human rights around the world, and remind you that you will always have a true friend in Israel.