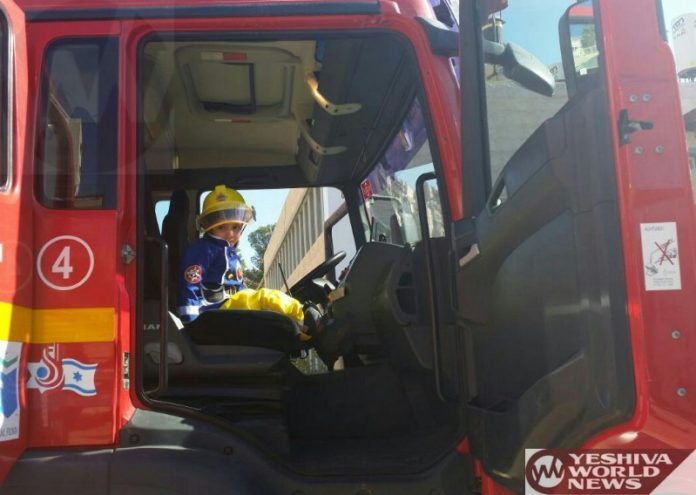 A few days ago, a request came to the Jerusalem Fire & Rescue station about a cute boy named David who is suffering from a serious illness. His dream is to become a firefighter.

Among the many activities of the fire fighter that David experienced:

Drive in the fire engine and turn on sirens and flashing lights, assistance in extinguishing the simulation of fire, operation of a crane for heights and rescue through it, the of rescue and extrication gear, and the introduction and command of the large fire and rescue vehicles.

Afterwards, the commander of the station invited David to the command table and authorized him to command the firefighters in Jerusalem for a day.

At the end of the fun and exciting day, David thanked the station commander and the fire fighters for their warm welcome, the fulfillment of the dream and the gifts they had given him and said to them: “You have fulfilled my dream and you have made me very happy”.

Eyal Cohen, Commander of Firefighting & Rescue Station, Jerusalem said, “I was moved to meet with David and be a part of his realizing a dream, albeit for a day. In addition to their life-saving work, Jerusalem firefighters are always ready and willing to give their all for the tzibur, and they remain greatly involved in the community and the ability to provide a response to every person in any situation provides us the strength and remains our driving force.”

“We wish David a refuah shleima and good health and he is now a part of our firefighting family” added commander Cohen.