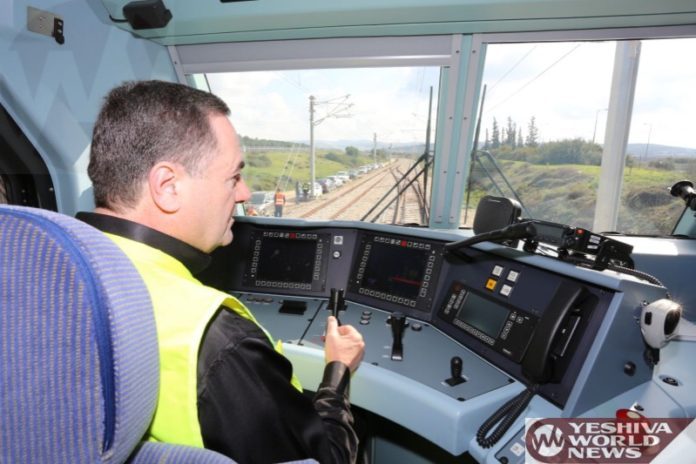 The Jerusalem-Tel Aviv electric express train is making history, explains Transportation Minister Yisrael Katz, who on Tuesday, 29 Teves, was present for the line’s first test run. There will be many test runs in the coming months as the line is scheduled to open in three months.

During the trip, which was attended by many journalists, Minister Katz discovered that he had decided to call the railroad tracks linking Tel Aviv to Jerusalem, the “Tracks of King David”.

“We connect Jerusalem and connect to the history of Jerusalem, and I decided to call the railway line to Jerusalem the tracks of King David, after King David, who conquered Jerusalem and turned it into the capital of Israel”, Minister Katz added.

The Minister of Transportation noted that the fast train line to Jerusalem, which will open on March 30, 2018, will enable the masses of Israel to make a pilgrimage to Jerusalem via an electric train that will travel through dozens of kilometers of tunnels and bridges at a speed of 160 kilometers per hour. The train will run past Ben-Gurion Airport, Modi’in, Shar HaGai, and will arrive in Jerusalem in just 28 minutes.

During stage one of operation, one rail will operate from Jerusalem to the Haganah Station in Tel Aviv, operating two trains an hour in each direction during the first months. In stage two, two rails will operate and there will be a third train an hour and the number will gradually increase until there are six trains operating hourly in each direction.

The new Jerusalem station is eight meters underground and commuters will have three elevators at their disposal, each capable of taking 35 people and take them within a matter of seconds. The estimated cost of the project is NIS 7 billion.