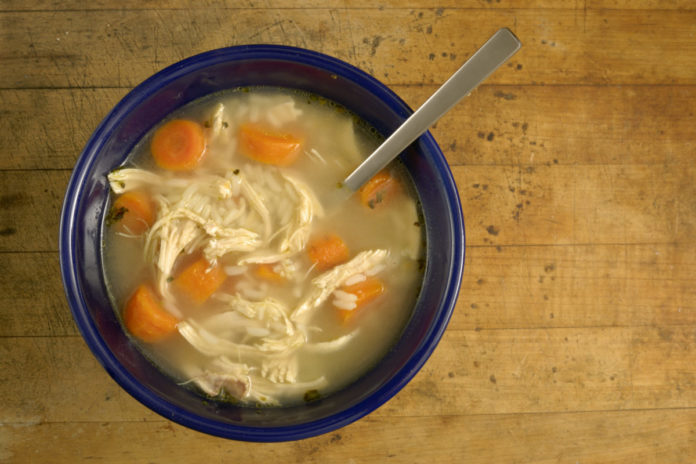 (from Kveller.com) Chicken soup is arguably the most famous Jewish food, and with good reason. It is delicious, therapeutic, healthful, freezes well, etc.

Literally the only thing that’s “wrong” with chicken soup is that it takes hours to make. As I’ve learned the hard way, we can’t return from a long day of work on a chilly evening and hope to have chicken soup, real chicken soup, that same night.

Enter the magical Instant Pot, the product of the year in 2016 (and 2017, and so on). We bought one on Amazon Prime Day last summer from our hotel room in South Korea because pretty much the entire world — or at least the people in our circles — wouldn’t shut up about it. And we’re so glad we did, for many reasons.

Of course, my husband’s great-grandmother didn’t have an Instant Pot. She made her soup the old fashioned way, watching a simmering stockpot for hours. But through trial and error, Matt and I found a way to craft a quickie, IP-friendly version that is true to the original but takes a fraction of the time.

The only modification we made was a small one: Our version of Bubbe’s soup requires pressing the retained liquid out of the meat and veggies, as we found that the flavors did not as easily release into the broth, even after 45 minutes of high-pressure cooking. (Any more than 45 minutes in the pot, however, left us with chicken too denatured to serve in the soup.)

In addition to cutting down cooking and prep times from over three hours to just one, using a pressure cooker means you don’t have to “skim the scum”— or even look at the soup, frankly — while it cooks. That’s another huge bonus.

This recipe is designed for an 8-quart electric pressure cooker, but you can scale it up or down depending on your needs.

Add all non-optional ingredients to the pressure cooker and set to high pressure for 45 minutes.

(In the meantime, you can make the noodles or matzah balls. If using a packaged mix, the balls take about 35 minutes, including prep and rest time. Perfect!)

When 45 minutes is up, manually release the pressure. Your broth may be oily and a little foamy – this is normal.

Remove the solids but do not discard. From those solids, set aside the big chunks of thigh/leg meat and carrot, if you wish to serve those in your soup.

Place all solids you didn’t reserve in a mesh strainer over a clean stockpot, and press on the solids to expel their retained broth into the pot. (You can use a wooden spoon or ladle to press firmly, but don’t overdo it.) Once the solids have been pressed— it may take a couple of batches to get them all done —discard them and rinse the strainer.

Next, strain the broth from the pressure cooker pot through the mesh strainer into the stockpot. Strain once more, perhaps using a finer mesh, for an even clearer broth.

Season with kosher salt. While it may take more than 3 tablespoons until it tastes right, begin by adding salt gradually and continually tasting. (But don’t be shy with the salt!)

If not serving immediately, let it cool on the counter in wide-mouthed jars and then refrigerate. We like to make it a day ahead to easily skim the fat layer after it congeals overnight. If there are any remaining solids, they’ll be light gray, just below the congealed fat, and are also easily removed.

Once heated, serve with the matzah balls or noodles, cooked carrot and/or chicken meat, and garnish with the chopped dill.