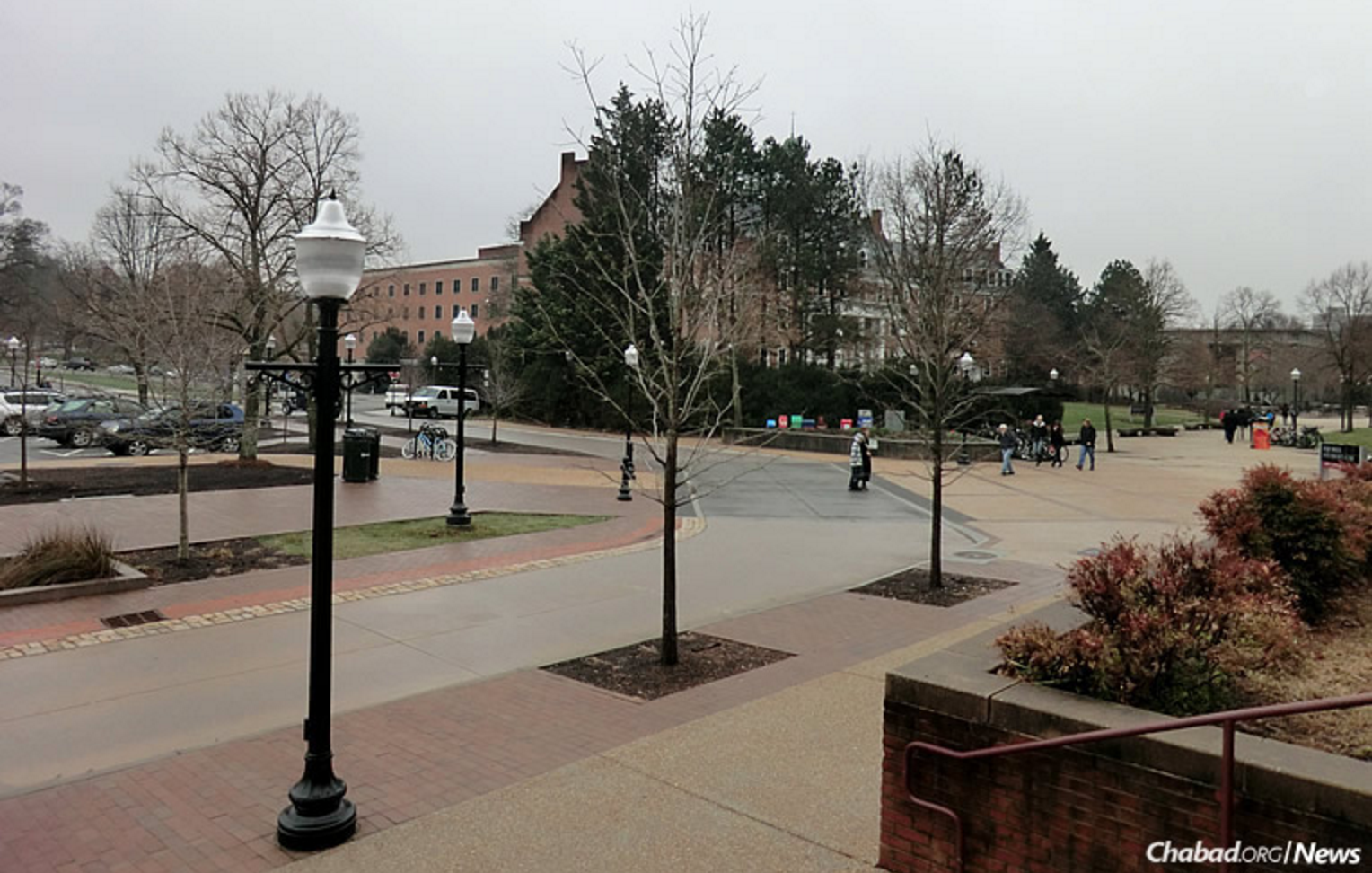 A solidarity rally at Virginia Tech in Blacksburg, Va., will take place at the Graduate Life Center Plaza, above, following a weekend incident in which more than 100 anti-Semitic leaflets were left on the grounds of the university Chabad House. (Photo: Courtesy of Virginia Tech)

Hundreds of students and other concerned citizens are expected to gather late Monday afternoon on the campus of Virginia Tech in Blacksburg, Va., to show their support for the Jewish community after more than 100 anti-Semitic leaflets were left on the grounds of the Chabad House over the weekend.

The flyers, which had hand-drawn swastikas on them, were discovered around 4:30 on Saturday afternoon—during the observance of the Jewish Sabbath—by Rabbi Zvi Yaakov Zwiebel, co-director of Chabad’s Librescu Jewish Student Center with his wife, Chanie.

“They were all over the property. I was absolutely shocked!” reports Zwiebel. “We’ve only ever had positive interactions with people here. The students are always very respectful, and we don’t even have a BDS movement [attempts to boycott and divest from Israel] here. So for this to happen is just shocking.”

Noting that some of his young children saw the flyers as well, the rabbi added: “I told them someone sent us some not nice things.” Because it was Shabbat and he could not use a phone, Zwiebel walked to the local police station to report the incident.

The Blacksburg Police Department is now investigating the matter.

The flyers were left at the Chabad House just a day after it was announced that Holocaust survivor Rabbi Nissen Mangel—a renowned scholar, author and philosopher who lives in Brooklyn, N.Y.—will be speaking on April 24, sponsored by the Chabad center. Mangel entered Auschwitz at the age of 10, surviving the war and the Nazi’s brutal regime. His talk is being held to mark the anniversary of the death of another Holocaust survivor, Liviu Librescu.

Librescu was a Virginia Tech professor who sacrificed his own life on April 17, 2007, to save his students in the midst of an attack at the university. Librescu barricaded his classroom as a gunman tried to enter, allowing dozens of students to jump from the windows to safety. The gunman ultimately got in, and shot and killed the 76-year-old, who was one of 32 people murdered in what remains the deadliest school massacre in U.S. history.

Chabad at Virginia Tech was named in his memory.

After hearing about the hate-filled flyers from a Jewish student, members of the school’s student government, Rex Willis and Julia Billingsley, took to Facebook to urge all members of the university community to attend the solidarity rally.

“We can’t sit by and let minority groups on campus face these kinds of hateful attacks alone,” Billingsley says in the Facebook video posting.

“Virginia Tech is our community,” Willis continues, “and it is one where everyone deserves to feel at home. … Come out and show your support for your fellow Hokies, who may be feeling discouraged and afraid at this time. It is time to stand together in unified action for the Hokie community.”

Also expressing support for the community is University President Timothy D. Sands, who took to Twitter with: “Hokies stand with you. The propagators of hate may be among us, but they are not welcome in our community.”

“There has been an outpouring of love and support,” Zwiebel reports, noting that people are saying “we are with you, and we can’t believe this has happened. This just does not happen here. This is not something anyone is used to.”

Rabbi Nissen Mangel is coming to speak at Virginia Tech on April 24.

He adds that it is also bringing out Jewish students he does not know, who are coming to show their support. In fact, it was only after this incident that he discovered that his own neighbor is Jewish.

That will be the gist of the message he will deliver when he speaks at the rally, where he will also encourage people to attend the April 24 program. “Reach out,” he says, “to friends in all communities, and show each other love and support.”

In an attempt to counter the hate, Chabad at Virginia Tech has set up a fundraising page called “We Will Prevail.” All proceeds will be used to expand their programming, reach out to more students and make this year’s celebration of Passover at the university bigger than ever.