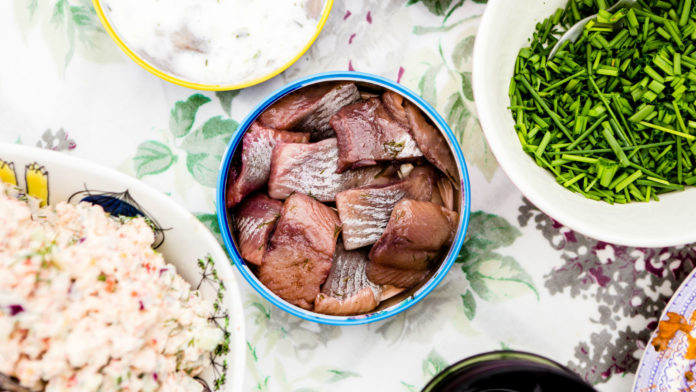 (The Nosher) There are so many wonderful Jewish foods to enjoy: sabich and pastrami, kubaneh and knishes, babka and bimuelos. But there’s also some seriously cringe-worthy traditional Jewish foods that still grace many holiday and Friday night dinner tables. Of course there is the argument to be made that one man’s gefilte fish jelly is another man’s caviar. Meaning: The foods we grow up with may seem weird or disgusting to other people, but when they are the comfort food of your family or culture, they are delicious and inviting.

And there is another part of this — so many of these dishes were actually born out of necessity and poverty. We Jews were poor and we needed to use everything at hand to provide enough food for our families to eat. Long before there was this trendy thing in the restaurant scene called “nose-to-tail cooking,” peasant Jews around the world created dishes like gefilte fish, cholent, kishke and ptcha to try and make a little bit go a long way.

These dishes might be gross, but they also tell a story of our people.

Ptcha is best described as calf’s foot jelly, or an aspic. That’s right, it’s meat jello and it seems to be the most offensive traditional Ashkenazi Jewish food we could find. It is almost universally reviled and not commonly made anymore. Side note: My father-in-law loves it as does Peter Shelsky of Shelsky’s Appetizing, so it must have some redeeming characteristics. I just don’t know what they are.

Herring can be sweet and creamy or it can be more savory and briny, and it evokes a lot of opinions. Personally, I love herring, especially for brunch or with lots of cold vodka. But many, many others (including lots of you readers) really hate the stuff.

Gefilte fish, or stuffed fish, is both a loved and loathed traditional Ashkenazi dish. For the families that grew up with homemade gefilte fish, it is far more loved than loathed. Although there are still tales of the carp in the bathtub that caused a lot of nightmares for Jewish children. But many American Jews actually grew up with jarred gefilte fish: grayish patties of boiled fish in a weird liquid with a “jelly” on top, which is the specific kind of gefilte fish that is most hated.

Russian cuisine has no shortage of chilled soups, but none is so reviled as schav, a soup made of sorrel. It’s a pale green color that is anything but enticing, and it’s quite bitter in taste.

Many Ashkenazi Jews associate tongue with a sweet dish made with apricot or other dried fruit. Tongue can also be pickled and served like deli meat (my father’s favorite). But there is also a Persian tradition of serving sweet braised cow tongue for Rosh Hashanah. Regardless of how and when it is served, it grosses a lot of people out, mostly because tongue, when cooked, still looks like a big cow tongue, which is a bit much to swallow.

Stuffed miltz, or cow spleen, just sounds disgusting no matter how you describe it. But we gotta give it to our ancestors — they really knew how to try and use every part of the animal.

Shuba, also known as “herring in an overcoat,” is a dish that is both loved and hated. It’s a layered Russian salad made of chopped egg, beet and herring. Personally, I love it, but I know many others who gag at the thought of those flavors all combined.

Al Mazieh is a Syrian cornstarch pudding, (no, I’m not talking about rich and creamy malabi) made from cornstarch, rose water and nuts. Sorry to Poopa Dweck, whose cookbook Aromas of Aleppo I love, but this recipe just doesn’t quite satisfy.

Here is another dish that is loved by some, loathed by others. Kishke (meaning “gut” in Yiddish) is also known as stuffed derma or helzel, which is actually stuffed chicken skin. Kishke is a stuffing made out of vegetables, schmaltz and some kind of starch, such as matzah meal, crackers or bread all stuffed inside a cow intestine. The casing is no longer made out of cow intestine and can easily be purchased ready-made at your local kosher market or butcher. Some people put a whole kishke in their cholent (like my husband’s family). Very few restaurants serve kishke, but if you find yourself at Manny’s Cafeteria and Deli in Chicago, you must try their homemade version.