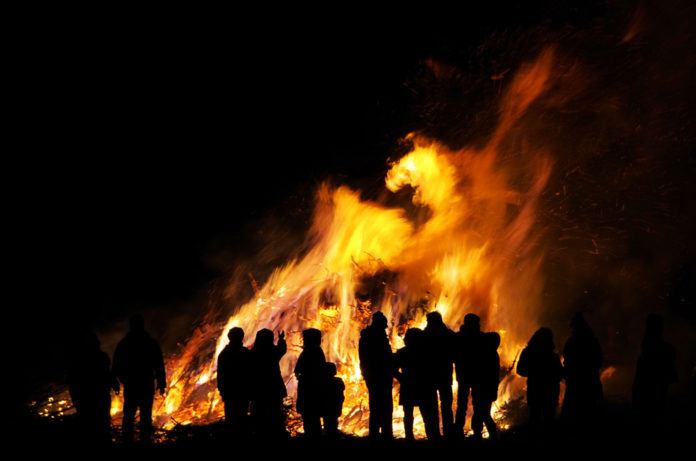 Before his death, Rabbi Shimon promised to reveal deep mystical secrets, and it is believed the light of day miraculously lingered until he finished and died. Lighting bonfires on his yahrzeit honors the extended light. If your local fire department frowns on such displays, try a barbecue or picnic. The best part of the bonfires, says Rabbi Michael Beals of Congregation Beth Shalom in Wilmington, Del., might be the “guitars and lots of singing of Hebrew folksongs.” Or these days, adds the rabbi, “it’s also most definitely the s’mores.”

It is said both Rabbis Akiva and Shimon were so holy that during their lifetime, all rainbows—the reminder of God’s promise to never to destroy the world after the flood of Noah’s era—were suspended. Bows and arrows, then, are a Lag B’Omer tradition. Israeli youngsters tend to use rubber-tipped arrows for safety reasons. But even those can be lethal, warns Thomas Herrington, owner of the Ace Archers range in Foxboro, Mass. “They can kill a squirrel or rabbit on impact,” he says. “So leave yourself lots of space.”

According to the Talmud, Rabbi Shimon and his son Rabbi Eleazar hid from the Romans in a cave in northern Israel for 13 years. But today’s spelunkers need to take precautions, specifically traveling in groups and taking along multiple light sources, says Vickie Carson, public information officer at Kentucky’s Mammoth Cave National Park.

How did Rabbi Shimon and his son survive those 13 years? Miraculously, a carob tree at the mouth of the cave and a fresh-water spring sustained them. Today, dining on carob treats—carob brownies in particular—is a tribute to these miracles. “Since the powder is just ground-up carob, there’s no need for a hechsher (kosher certification)” on carob powder, says Arlene Scharf, who runs the kashrut.com website.

Take a trip to Meron

The most authentic Lag B’Omer experience comes, not surprisingly, in Israel, where you can join some 250,000 Jews at the tomb of Rabbi Shimon in Meron, near the spiritually endowed northern city of Safed (Tzfat). At Meron, the large crowd celebrates the transmission of the Zohar, the foundational text of Jewish mysticism authored by Rabbi Shimon.

The custom to give a first haircut to 3-year-old boys (upsherin) in Meron on Lag B’Omer dates back to the early Kabbalists. Today, many Jewish parents around the world still use the holiday for boys’ first haircuts. “I don’t know if Ari remembers much; it was nearly 28 years ago and he’s getting married in three weeks,” says Alane Schreiber of Sharon, Mass., recalling her son’s upsherin on Lag B’Omer. “But I still have his long blonde ponytail.”

While the counting of the Omer can be gloomy, all mourning is lifted on the 33rd day. Since the prior days’ Jewish legal prohibitions include listening to live music, you can happily attend a concert on Lag B’Omer.

Refraining from shaving is another Jewish mourning tradition implemented during the Omer, making Lag B’Omer the day for men to get out the razor and remove a month’s worth of facial hair. “This has got to be our favorite Jewish holiday,” quips Irv Kempner, a former vice president of Gillette, a Fortune 500 company that makes its fortune on razors and electric shavers.

Get married (or attend a wedding)

Since Jewish weddings are prohibited during the Omer’s mourning period, many couples longing for spring nuptials will grab Lag B’Omer as their wedding date. Yael and Rabbi Yosef Resnick of Massachusetts tied the knot on Lag B’Omer in 1993. “We felt that connection, and learned about Rabbi Shimon bar Yochai and the significance of the date,” Yael says. “I don’t think it’s a coincidence that after we got married and went to Tzfat for several months, the apartment we rented was on Bar Yochai Street.”

Cheer at a parade

The “Great Parade” is a time-honored Chabad-Lubavitch Hasidic tradition since 1987, when movement leader Rabbi Menachem Mendel Schneerson instituted it. This year’s parades will take place in cities including Los Angeles, Chicago, Miami, Toronto, Montreal, Detroit, London, Paris, Jerusalem, Johannesburg and Melbourne. Along Eastern Parkway in Brooklyn, N.Y., the home of Chabad headquarters, 35,000 parade-goers are expected to line the streets, while 100,000 will watch online. Parade organizer Rabbi Shimon Hecht says, “What greater way to display Jewish pride and unity than by gathering thousands of Jews together and marching proudly in the streets?”