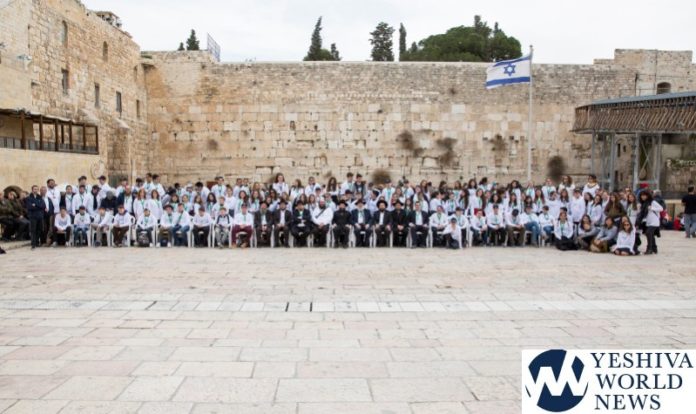 One hundred boys and girls from Europe celebrated the landmark occasion of their bar/bat mitzvah on Wednesday and Thursday, 29 and 30 Shevat 5778 in Jerusalem, in a festive ceremony held in their honor at the Kosel and Zedekiah’s Cave, also known as Solomon’s Quarries.

The adolescents, hailing from countries across Europe including Russia, Ukraine, Italy, Germany, Hungary, France, and Spain, arrived at the start of the week for a Jewish roots journey to Israel, an exhilarating and emotional experience that culminated last night with a spectacular bar/bat mitzvah celebration with festivities continuing into the ceremony and receiving an aliyah at the Kosel on Thursday morning, 1 Rosh Chodesh Adar.

Throughout their weeklong journey, the 12-year-old girls and 13-year-old boys visited religious, sacred and historic sites and tourist attractions around Israel, granting them a unique opportunity to strengthen their personal bond with Jewish tradition, the State and people of Israel. The students were accompanied by rabbis from their respective Jewish community, and a native speaker of their language was attached to each group. The journey to Israel and bar/bat mitzvah celebration for 100 youths was sponsored by the Morasha Department of Center of European rabbis, with generous support and assistance by Mr. Moti Sonnenfeld and the Danielle Sonnenfeld Foundations.

In the course of the banquet which was held in Zedekiah’s Cave on Wednesday with guests of honor expressing their profound excitement and emotion, which was shared by all participants.

In particular, Mr. Moti Sonnenfeld’s stirring words about his daughter Danielle, a”h, a young woman who brimmed with life and love and was also privileged to celebrate her bat mitzvah in Israel. At the age of 20, after spending a full day volunteering at the oncology unit of Schneider Children’s Hospital, Danielle’s life was cut short in a fatal car crash, which was the catalyst that spurred her parents to establish the Danielle Sonnenfeld Foundation in her memory.

Sonnenfeld highlighted one particular story that characterized Danielle during her short life.

“One day, Danielle heard of a young man who was hospitalized in the oncology unit. He was a fresh Russian immigrant who’d arrived without any family and was completely alone. His illness was rapidly consuming his body and his hopes of recovery were minimal. Despairing of life and his future, the young man stopped eating and declined medical treatment. Yet Danielle refused to give in. With her devotion, spirit and love of people, she encouraged him and convinced him to eat and persist with the treatment. Every day, the young man waited eagerly for Danielle—his angel of mercy—to visit.

“Sadly, the young man passed away a short while later, but he went in peace and was buried in Beersheva. Danielle made a point of traveling once a month to Beersheva and recited Tehillim at his graveside, aware that there was no one else to daven for him. That was Danielle—a person overflowing with love and chessed. And I call upon all of you to continue growing and maturing with that same kindness and chessed. No less important is your bond with the Jewish nation and country. When you return home to your countries, I ask that you perpetuate Danielle’s legacy—a legacy of love and Jewish pride.”

At the close of the events, the parents, boys and girls expressed their deep gratitude to the Center of European Rabbis, which is under the auspices of Chairman Rabbi Menachem Margolin, Deputy Chairman Rabbi Aryeh Goldberg, and faculty members Rabbi Yossi Beinhacker and Rabbi Avraham Abba Trotsky for their efforts to produce an unforgettable journey and celebration. They also thanked the event sponsors including the Ministry of Jerusalem and Heritage under the auspieces of Minister Zev Elkin, Mr. Rami Levi, Rabbi Maimon, and Mr. Moti Sonnenfeld.

This is the 9th consecutive year of the project that brings bar and bat mitzvah boys and girls on an educational and experiential journey to Israel to strengthen their commitment and bond to the country and nation. Aside from the tours and attractions, the program encompasses a wide variety of educational and social programs.