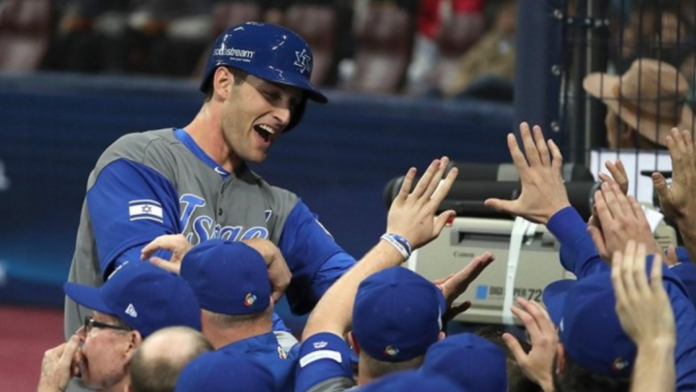 Well, it’s official. Israel is the first team to advance to the second round of the 2017 World Baseball Classic.
Israel came into Seoul, played two teams they had (supposedly) no chance of beating, won both games and (thanks to a tight win by the Netherlands) will be moving on. Wait, what?

Yes, you read that correctly. These bunch of “has beens” and “no namers” have had every classic sports underdog cliche thrown at them faster than you can say Mensch on a Bench:

Well, they certainly shut everyone up, didn’t they?
Did they receive the title of “first” by the happenstance of scheduling their games first? Yup, but that doesn’t detract from the fact that a team with 200-1 odds prior to the tournament is currently undefeated and riding a tidal wave of momentum into the second round of tournament play in Tokyo next week.

Team Israel during a practice game against the South Korean Army team at Gocheok Sky Dome in Seoul, South Korea. The Israelis are among the lowest-ranked squads in the World Baseball Classic’s 16-team field.

And if you watched any part of their two victories, there is no way you can deny how Israel Baseball has wholly earned their spot in the tournament’s quarterfinal stage.

There’s no other way to describe it. Back in September Israel destroyed the competition to qualify for this year’s tournament. Then on day 1 of the Classic, the boys in blue beat Korea on its home field. Less than a day later they decimated Chinese Taipei. Ultimately, they earned a bid in the second round of the tournament – and clinched a spot in the 2021 WBC in doing so.

As fun as it’s been – and it’s been very fun – it may be time for a reality check. Israel had the fortune of playing in the tournament’s easiest group. They will likely face two-time champions Japan in the next round, as well as Cuba, one of the world’s premier baseball nations. This next set of games will be tough for Israel, BUT who cares?

Regardless of what is in store for Israel in the coming rounds, they have already achieved so much in this tournament. Is anyone even talking about baseball powerhouses like Japan, the Dominican Republic or even Team USA? Nope. It’s all about a bunch of “oh yeah, I remember him!” guys who were dissed and dismissed by countless MLB teams, putting on a show for the world.

These guys are putting Israel baseball (and Israel itself) on the map. They’re garnering interest for a sport with less than 1,000 players in a country with a population of 8 million. The team was sponsored by Israeli giant Sodastream. They’re creating endless social media posts with the simple question of: who knew Israel had a national baseball team?! They’re even getting shout outs from the IDF and the Prime Minister of Israel:

All of this is extremely important for Israel’s sports landscape. Baseball is one of Israel’s fastest growing sports, and with a new field, programs all over the country for players of all ages, and different tiers of national teams, the sport will be embedded into the country very shortly.

Whatever your take on Israel’s lineup being mainly comprised of Jewish Americans who are not homegrown Israelis, it’s tough to deny the impact they’re having on the sport, the country, and Jewish pride in general. The underdog status is something that Israel can embrace in every shape and form, and the way these guys are playing, they’re doing all they can to remove that status from everyone’s minds.

Whatever happens in round 2 in Tokyo next week, for one amazing week, a bunch of journeymen put on the Star of David on their caps, played some ball and captivated the sports world. To me, that’s a win.