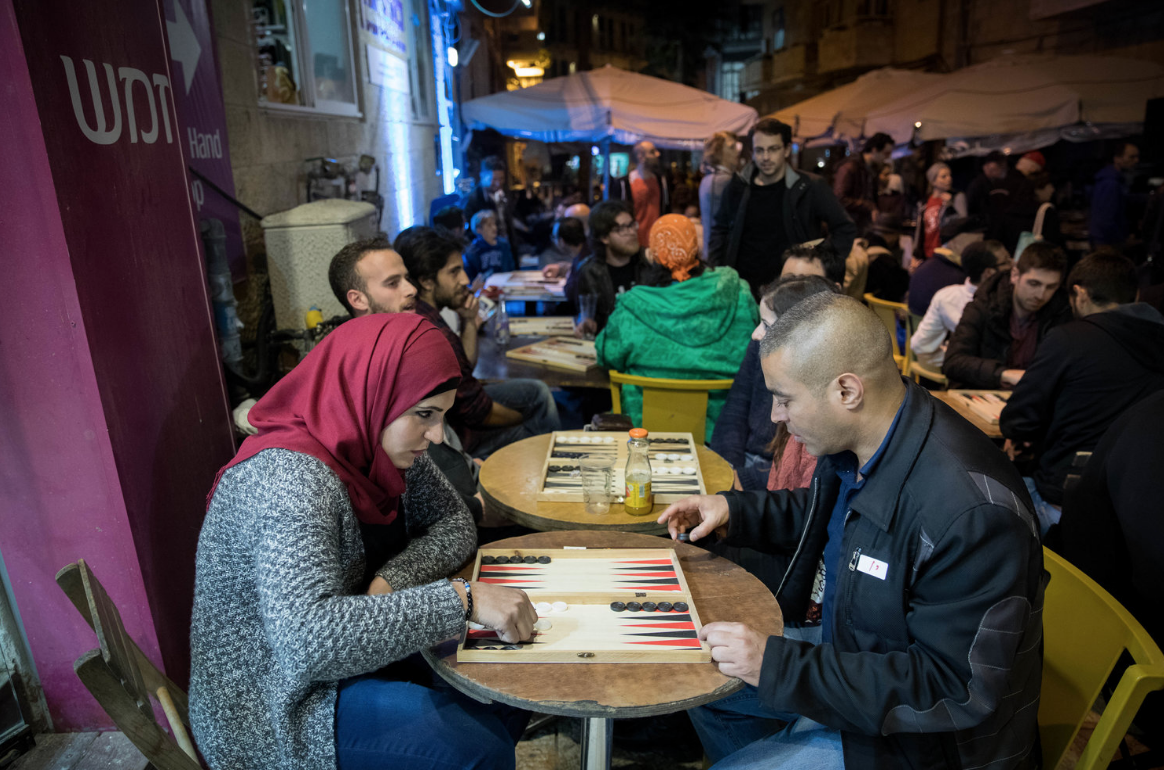 In February, Israel’s Channel 10 broadcast a report featuring interviews with some of the hundreds of young Israeli Arabs—some of whom described themselves as Palestinians—who have moved to Haifa and Tel Aviv.

In Haifa, there are now bars specifically dedicated to these new Arab customers. Asked if this phenomenon represents coexistence, a group of young Arabs interviewed by Channel 10 rejected that notion, with one woman saying, “This is passé—the 1990s. There is no such thing.”

Indeed, it is difficult to generalize Israel’s Arab sector, which represents about 20 percent of the country’s total population.

While Israeli Muslims are increasingly integrating economically in various sectors, such as in academia and typical middle-class professions, they mostly remain culturally distinct and maintain a separate way of life in Arab-majority cities and villages. Although many Arabs and Muslims work and attend school alongside Jews, they often experience disagreement and tensions on matters of politics and culture.

Rodayna Badir—a doctoral candidate and coordinator for a special master’s degree program for Israeli Arabs at Bar-Ilan University—told JNS.org that she has worked for most of her life with Jewish Israelis, but when it comes to culture and personal life, there is a stark separation.

Badir, a Muslim, has worked for years at the Schneider Children’s Medical Center in Petah Tikva to help Arabs and Jews prepare for surgery.

“The difference between me and most Arab women is that I studied in the university and advanced professionally within Jewish society,” she said, adding that many Arabs working with Jews do not progress within the Jewish-dominated Israeli workforce.

When spending time in an Arab town in Israel, the differences from a Jewish-heavy area are obvious. Most signs are in Arabic, there are mosques and the women are often wearing hijabs (Islamic head coverings). The religious holidays, customs and other daily routines are completely different from the landscape in Jewish-majority cities such as Tel Aviv and Herzliya, which seem particularly Western in comparison.

“Arabs work with Jews, but go back to their traditional framework in the village,” Badir explained. There is also a feeling among many Israeli Arabs that they should not abandon their culture, she noted.

“I spend a lot of time in Tel Aviv, but I live in Kfar Kassem. I don’t leave my roots. I return home every day,” said Badir. Arabs who live in villages in the center of Israel tend to be more wealthy, more integrated economically and more adept at speaking Hebrew than those in the north, who are more separated from Jewish-Israeli society, she added.

‘We live in Israel’

Despite the cultural differences, there are many subgroups within the Israeli-Arab community that hold views contrary to the Arabs’ historically prevalent Palestinian narrative, which views life largely through the prism of the Israeli-Palestinian conflict. Many Israeli Druze and a growing number of Christian Arabs have positive views about the Israeli government, voluntarily serve in the military (which is only a requirement for Jewish Israelis) or complete national service, and do not identify with the Palestinian struggle against Israel.

Ismail Amr, who served for three decades as the treasurer of Kfar Kassem, an Arab city situated about 12 miles east of Tel Aviv, told JNS.org, “We live in Israel, a state with the rule of law, and the city is under the jurisdiction of the [Israeli] Interior Ministry.”

Hasan Majadele—a physiotherapist who lives in the northern town of Baqa al-Gharbiya and is a relative of Raleb Majadele, a former Member of Knesset for the Labor Party who was also Israel’s first-ever Muslim government minister—said he does not want Arab politicians to focus exclusively on the Israeli-Palestinian conflict. During the past decade’s wars between Israel and Hamas in Gaza, local protests in his town were peaceful, he said.

Assad Assad, a Druze former Israel Defense Forces colonel and former Knesset member for the Likud Party, told JNS.org that although the Druze entered the military “just like the Jews since the establishment of the state,” they “receive less than the Arabs.” He lamented that the Druze experience socio-economic disadvantages in Israel.

“Today, with Prime Minister Benjamin Netanyahu, the government has increased the budget to develop Druze villages,” Farhat told JNS.org, adding, “There still are problems such as illegal building, but things continue to improve.”

In December 2015, the Israeli government passed a budget that included a five-year plan of around 10-15 billion shekels ($2.7 billion-$4.1 billion) for developing the Arab sector in areas such as housing and infrastructure.

Farhat went on to point out that Druze are receiving quality positions in Israeli companies, state institutions, the military and the police force. Additionally, his Druze Zionist Council for Israel is promoting activities with support from the World Zionist Organization—including Zionist summer seminars for Druze youths as well as trips to the Knesset and the Western Wall to “show why Jerusalem is so important for the Israeli nation,” said Farhat.