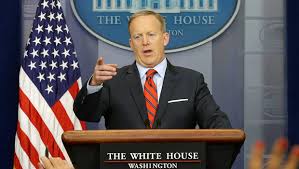 Sean Spicer has resigned his post as White House press secretary, reportedly disappointed with the appointment of New York financier Anthony Scaramucci as communications director. According to some Jewish leaders, he should have quit three months ago.

Over six months as President Donald Trump’s mouthpiece, Spicer managed to get in two separate tiffs with Jewish leaders over the Holocaust, one which sparked calls for his job. For good measure, he also made controversial statements about Jerusalem and the rash of JCC bomb threats.

Here are four times Spicey mixed it up with the Jews, and a bonus from someone who played him on TV.

Spicer often had the unenviable task of doubling down on his boss’ more outlandish statements — for example, the visibly incorrect insistence that the inauguration crowd for Trump was larger than Barack Obama’s.

Days later, Spicer found himself on the defensive against nearly every major American Jewish group. On Jan. 27, Trump’s official statement marking International Holocaust Remembrance Day omitted any mention of Jews. Jewish groups — even those that supported Trump — slammed the statement. The Trump-friendly Zionist Organization of America expressed “chagrin and deep pain” at Trump “omitting any mention of anti-Semitism and the six million Jews.”

But the president’s deputies said the statement was “inclusive” of the Holocaust’s range of victims. Spicer in a media briefing called the critics “pathetic” and accused them of “nitpicking a statement.”

“To suggest that remembering the Holocaust and acknowledging all of the people — Jewish, gypsies, priests, disabled, gays and lesbians — I mean it is pathetic that people are picking on a statement,” he said.

Spicer and the Holocaust, Episode II: “Hitler, who didn’t even sink to using chemical weapons”

The January Holocaust controversy might have been bad. But the one to come would be much worse.

Shortly after Trump ordered an attack on Syria in retaliation for a chemical weapons attack by Bashar Assad, Spicer wanted to accentuate Assad’s evil. So he compared the Syrian dictator to Adolf Hitler — in a way that made Hitler look good.

Hitler did, of course, use chemical weapons on civilians, gassing millions of Jews with Zyklon B in concentration camps.

But when a reporter asked Spicer to clarify his words, he angered some critics even more, claiming that Hitler “was not using the gas on his own people,” then saying Nazis killed Jews in “Holocaust centers.”

The Jewish organizational wrath came swiftly. A range of groups criticized the statement, and the Anne Frank Center for Mutual Respect, a vocal Trump critic, called for Spicer to resign — as did House Minority Leader Nancy Pelosi. Israeli Transportation Minister Yisrael Katz tweeted that Spicer must “apologize or resign.”

“Frankly, I mistakenly made an inappropriate and insensitive reference to the Holocaust, for which frankly there is no comparison,” he told host Wolf Blitzer. “And for that I apologize. It was a mistake to do that.”

Spicer says Trump was right about the JCC bomb threats.

A couple of weeks before his second Holocaust gaffe, Spicer enjoyed a rare moment of validation. Following the arrest of an Israeli teen for the rash of bomb threats phoned into Jewish community centers this year, Spicer took an opportunity to note that his boss had been right all along.

Discussing the threats in February, according to Pennsylvania Attorney General Josh Shapiro, Trump told a meeting of states’ attorney generals that “sometimes it’s the reverse” and attacks are made “to make people – or to make others – look bad.”

The comments — if accurate — were a shock to Jews who had faulted Trump for hesitating to condemn the attacks. Two liberal Jewish groups blamed him for fostering a climate conducive to hate.

“We saw these threats coming into Jewish community centers, and there was an immediate jump to criticize folks on the right, and to denounce people on the right and ask them to condemn them, and it turns out that in fact it wasn’t someone on the right,” Spicer said at a media briefing. “The president from the get-go had said ‘I bet you it’s not someone [on the right]’ and he was right.”

Spicer definitely knows where the Western Wall is.

In May, Jewish groups criticized the Trump administration — this time from the right — for not affirming that the Western Wall is part of Israel. National Security Adviser H.R. McMaster declined to say so, and a State Department staffer reportedly told Prime Minister Benjamin Netanyahu’s office that the site is “not your territory.” While Israel has annexed eastern Jerusalem, where the wall is located, the international community does not recognize Israel’s claims.

In what may have been an attempt at compromise, Spicer told reporters the site is “clearly in Jerusalem.” But no one was disputing that.

In the end, Spicer did not address the question of sovereignty, adding that the debate over Jerusalem has “had serious consideration” and “will be a topic that’s going to be discussed during the president’s trip between the parties that he meets with.”

The demurrals irked Jews who were hoping for a more hawkish Israel policy from the president, particularly in light of his repeated promises to move the U.S. Embassy to Jerusalem.

Spicer inspired one of the most talked-about comic creations of the early Trump era: Melissa McCarthy’s imitation of the press secretary on multiple episodes of “Saturday Night Live.” One of those skits may well enter the Jewish canon: Alluding to the mix-up over Hitler and the “Holocaust centers,” McCarthy’s version of Spicer, dressed as the Easter Bunny, uses toy vegetables to explain the story of Passover, or what he/she calls “Jewish Easter.”

The pharaoh is “a bad, bad hombre,” explains “Spicer,” using one of Trump’s catchphrases. “He’s doing some really bad stuff to the Jews. I mean, not even Hitler is –” (he catches himself, saying under his breath, “not going to go there again”). Then, manipulating the toys, he explains: “The Jews: These guys pass over, literally, these guys float above the pharaoh.”

As for “Holocaust centers,” the character makes one more effort to get it right: “I clearly meant to say ‘concentration clubs.’ Let it drop.”