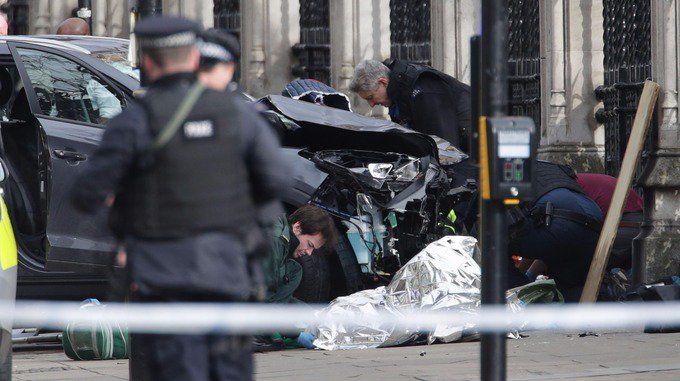 UPDATE: Reports of at least 2 dead so far. One may be a police officer.

UPDATE 2: Sky News reports that one woman is now confirmed to have been killed.

Update 3: The assailant is reported to be dead.

The British Parliament is in lockdown after  armed police have shot an intruder inside the gates of the Houses of Parliament after he drove into pedestrians on Westminster Bridge.

The knifeman managed to break into the grounds of Parliament and stab a police officer before he was shot.

Between 8-10 people are said to have mowed down by the car on Westminster Bridge, which is described as a ‘4×4’.

Prime Minister Theresa May, who was in the building at the time, is said to have been swiftly put  into a car by  police officers and driven away from the scene.

The House of Commons was suspended for the day.

An eye witness said that he saw a  car mow down at least five people on Westminster Bridge, he said the attacker looked to be middle aged and dark skinned or Asian.